For professionals in the flooring and construction industries, moisture-related problems loom as a constant threat to flooring installations and slab integrity. Finding ways to determine the level of moisture remaining in concrete, prior to installing a finished floor product, has been an ongoing reality for building and trade experts for decades.

Historically, moisture measurement in concrete was limited to surface-based methods of trying to evaluate internal moisture content. A simple time frame, like an average drying time per inch of slab depth, while handy, is not sufficient to accurately determine moisture content.

Too many variables can influence the rate of moisture release and absorption in concrete. A different means of measuring moisture in the concrete was necessary. Some of these surface-based tests include calcium chloride testing, the hood method, the plastic wrap method, and hand-held moisture meters.

–          Calcium chloride testing, also known commonly as a moisture vapor emission test, began back before the 1940s and was at the time simply known as a “dampness test”. By sealing a desiccant material under an impermeable cover, the understanding was that any moisture in the concrete would be absorbed by the material. After a certain time period elapsed, the material would be either wet, indicating excess moisture, or dry, suggesting the slab was safely dried for flooring or finishing. It was a simple go/no go indication that had no quantitative results. (The plastic wrap method works on the same principle; a section of plastic wrap is sealed down and after time has elapsed, condensation under the plastic meant moisture was present, and no condensation indicated the slab was dry.)

By the 1960s, a manufacturer began producing a version of this test, referred to as a calcium chloride kit, with some additional stipulations: The slab must have a vapor barrier under it before testing, and there was now a “weight” assigned to the test. If the calcium chloride crystals increased in mass, it was surmised that this was caused by absorbed moisture coming from the slab (vapor transmission) and the increase in weight would indicate the amount of moisture present in the slab. The difficulty was that there was no testing done (that is recorded) of how that particular desiccant was chosen, how the weight tables were established and if the results were syncing with end results (were flooring installations successful over time?).1

However, the method became popular enough that the American Society for Testing and Materials (ASTM) developed ASTM F1869 to standardize the test method and determine best practices for its use. CaCl testing is still in use today, although it has now been disallowed by ASTM for lightweight concrete applications, and is increasingly coming into question as more accurate test methods are being developed.

–          The hood test was adopted in Britain several decades ago before making its appearance in the USA in the early 2000s (the related ASTM standard F2420 was published in 2005). It involves sealing an insulated hood that is impermeable to moisture on the concrete slab, then placing a probe inside the encapsulated space to measure the moisture content after it has equilibrated with the slab. It has some pluses and minuses, including the time factor involved, and the fact that it does not perform as reliably on hard-trowelled surfaces. It also faces the challenge that surface indications are not consistent with internal moisture measurement, and so the readings are not necessarily an indicator of how a moisture-sensitive flooring may react over time. 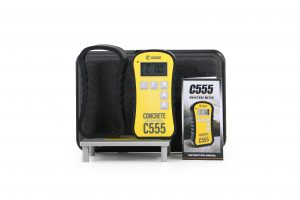 –          Concrete moisture meters can be very useful as surface indicator tools, but by design do not penetrate very far into a concrete slab, in order to prevent interference from steel reinforcements or other structural elements within the slab. In terms of moisture measurement, it also means that their signals do not reach far enough into a standard slab to provide an accurate reading for the entire slab depth.

Testing into different traits of concrete moisture movement began at the Technical University of Lund in Sweden during the 1990s, and led to several key observations: 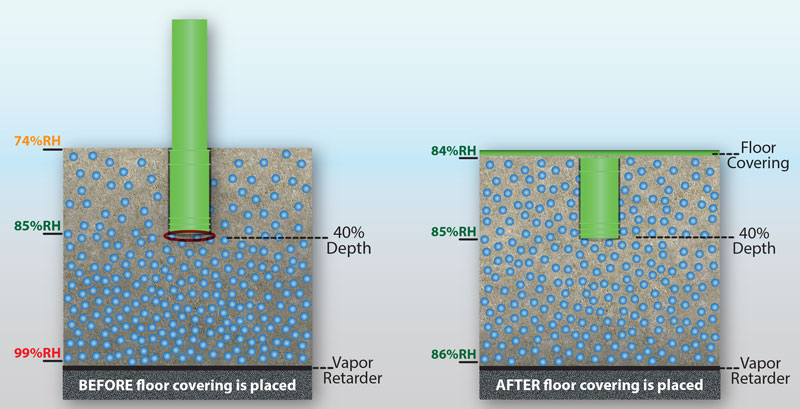 –          Concrete slabs typically have a “gradient” collection of moisture vapor; moisture levels will be lower near the surface and higher near the bottom of the slab. This is not surprising given that moisture must rise to the surface in order to evaporate away and allow more moisture to move to the top in the drying cycle.

–          The relative humidity level at 40% of the slab depth (20% if it can dry from two sides) gave the truest measurement of the final moisture level if the slab were to be sealed at that point in time.

–          Probes or sensors placed at this depth of the concrete (often called in-situ probes) could provide accurate and verifiable relative humidity readings of the moisture levels in the concrete slab.

What was the significance of this for the flooring industry?

With an accurate indication of the overall slab moisture conditions, flooring installers and building professionals could significantly reduce the risk of moisture-related flooring problems that were still plaguing the experts that were relying on surface-based test methods.

Relative humidity (RH) testing offered a scientifically verified option for experts looking to provide the best and most accurate measurement of moisture content in concrete slabs.

1 Howard Kanare, senior principal scientist with CTLGroup, gives a fuller explanation of the difficulties of CaCl testing in the Wagner Meters webinar at https://www.wagnermeters.com/webinar.